Back in September I ordered a Valve Index because I wanted to get into VR and it was a little bit of a gift to myself for finding employment. The website said 8+ weeks lead time, it even didn’t make you pay for it right away. A week ago I got an email saying it was ready and I needed to complete the order. Two days after that I had a notice that it was prepping for shipping. And finally, last night it showed up - I happened to wander down to the mail room just as the FedEx truck showed up!

My first experience with VR was a year or two ago at a friends. They had a PS VR, and I had a blast rescuing little robots in Astro Bot. I had also fallen in love with this video of Beat Saber. That game alone made me want to get my own VR kit, but at the time I had neither the computer capable of running it nor the “incentive” to reward myself. Well, a while ago I bought myself a gaming laptop from Razer. And early this fall, I landed a new job in Colorado. I figured that’s a good enough reason to spoil myself with a VR kit.

As far as which kit to get, I knew I definitely did not want to support Facebook (the company now behind the Oculus). So it was between HTC Vive and Valve Index. The Index was quite a bit more expensive, but it seemed like the premium option. As a tech geek, it was clear which one I had to get: 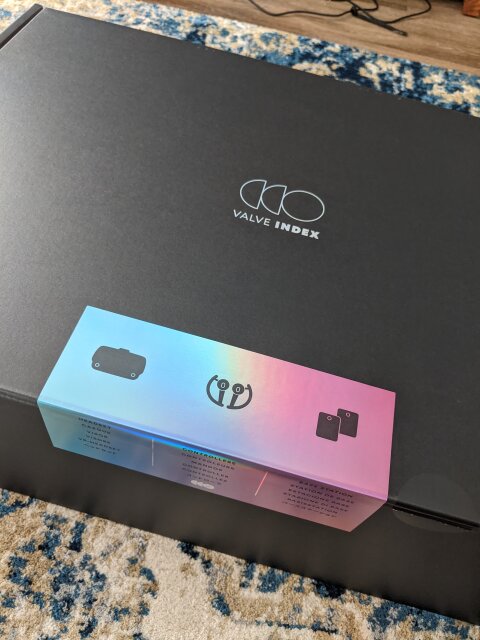 The Index hardware feels very well put together. The packaging is just… a breath of fresh air after the dumpster fire that I had to deal with at my last job. It was also very easy to setup. The headset fits nicely, but doesn’t quite sit right on my head so the image is sometimes blurry. I had the same problem on the PSVR, but way worse, so this is an improvement.

The Steam VR Chaperone system is neat as hell. It’s a system that is told the boundaries of the play area during setup, and if you get too close to them during gameplay a grid shows up to let you know you’re getting close to the edge. It’s unintrusive during normal play but is visible enough to get your attention if necessary.

The controllers are amazing, if a little small for my meat hooks. The finger sensing is pretty good for a first generation product and I can only hope they get better as time goes on. It has way fewer buttons/sticks than a regular console controller, but the input combinations are seemingly endless! (More on future posts.)

So far, I only have a few games - to try to limit myself and play the games fully: